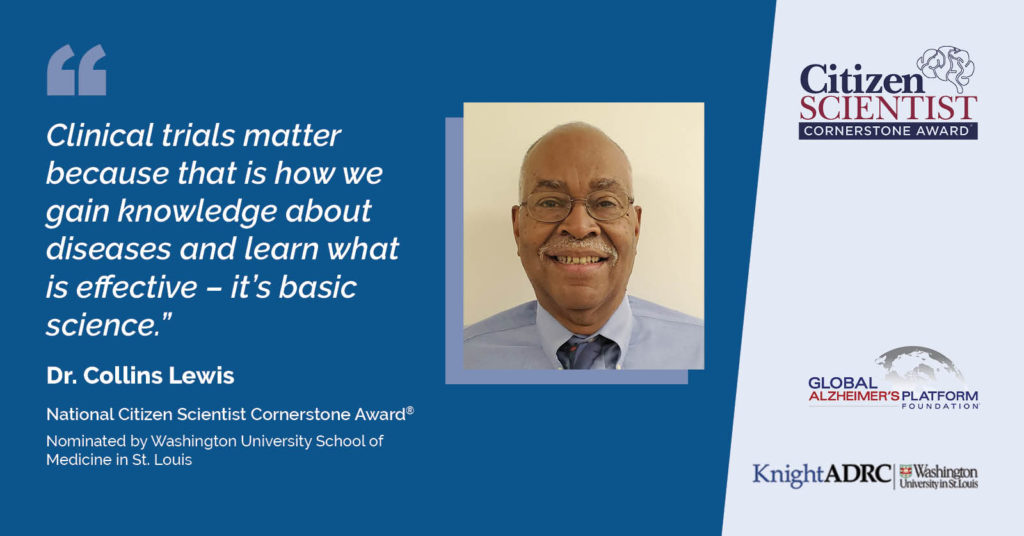 St. Louis, MO (October 22, 2020) – The Global Alzheimer’s Platform Foundation® (GAP) has recognized St. Louis psychiatrist Dr. Collins Lewis as the honoree of the National Citizen Scientist Cornerstone Award®. The Charles F. and Joanne Knight Alzheimer’s Disease Research Center at Washington University (Knight ADRC), where Dr. Lewis has volunteered in three Alzheimer’s clinical trials and is a member of the African American Advisory Board, nominated him for the award to recognize his extraordinary work to bring more diversity to clinical trials and to end the stigma around Alzheimer’s disease.

To accelerate the delivery of innovative Alzheimer’s therapies, GAP works with Knight ADRC and more than 80 other research centers across North America to improve recruitment efforts and the operation of clinical trials. This year, research centers in GAP’s network nominated dozens of dedicated volunteers for the 2020 National Citizen Scientist Awards.

“We know that mistrust and stigma are part of why Alzheimer’s clinical trials are not diverse enough, and we know that the lack of diversity negatively impacts research results,” said GAP President John Dwyer. “Dr. Lewis’ leadership to educate the people of St. Louis about Alzheimer’s disease and to support Knight ADRC’s outreach to minority communities is incredibly important for health equity and for the search for a cure.”

Dr. Lewis decided to volunteer for Alzheimer’s research at the Knight Alzheimer’s Disease Research Center because of his family’s history with the disease, and because Black people are twice as likely as white people to be diagnosed. At Knight ADRC, he is a member of the African American Advisory Board, which counsels the Knight ADRC research team concerning cultural sensitivity and appropriate outreach strategies to encourage active, long-term participation of African Americans in memory and aging studies.

“Many African Americans are reluctant to join studies because of the history of racism in medicine and medical research,” said Dr. Lewis. “I want people to understand that research today is not the way it used to be. In order to develop treatments for Alzheimer’s that work for everybody, scientists need a broad spectrum of people in clinical trials – not just African Americans, but Hispanic and Asian and indigenous people as well.”

“As a psychiatrist, Dr. Lewis brings a nuanced understanding of how to talk to people about difficult subjects like Alzheimer’s disease,” said Dr. B. Joy Snider, the Director of Knight ADRC Clinical Trials Unit. “The Knight ADRC team is determined to make sure that our group of clinical trial volunteers reflects our community, and Dr. Lewis’ awareness work is the backbone of that outreach.”

The Citizen Scientist Cornerstone Award, for which GAP recognized Dr. Lewis, honors a clinical trial volunteer who has personally made extraordinary efforts to support local research and participate in a trial. The National Citizen Scientist Awards are supported by the Vradenburg Foundation. To learn more, visit globalalzplatform.org/awards.

The Global Alzheimer’s Platform Foundation® (GAP) is a patient-centric nonprofit dedicated to accelerating the delivery of innovative therapies for neurological disorders by reducing the duration and cost of clinical trials. Research centers across the US and Canada are part of the growing GAP Network (GAP-Net). GAP supports GAP-Net research centers by assisting with study start up and recruitment activities, promoting diversity in research studies, and offering national programs that champion brain health and the citizen scientists who make research possible.