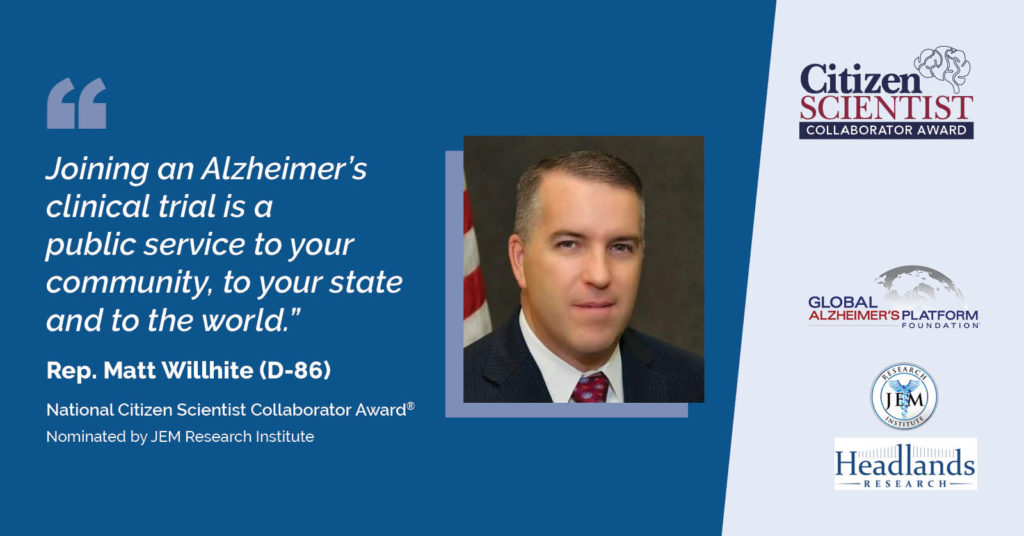 JEM Research Institute, part of the Headlands Research organization, where Willhite is a study partner for his mother, who is living with Alzheimer’s, nominated him for the award to recognize his extraordinary efforts to support Alzheimer’s research through clinical trials with his mother and through legislation.

“As a caregiver, a study partner and an elected official, Rep. Willhite is an advocate in the search for a cure for Alzheimer’s in every part of his life,” GAP President John Dwyer said. “It is incredibly important that he can take his personal experiences with the disease and with research to the legislature in order to better support the Florida Alzheimer’s community.”

Willhite and his mother were inspired to participate in clinical trials at JEM because of their medical backgrounds as a paramedic and a nurse, respectively. They both understood the profound importance of research and innovation in medicine, and the crucial role clinical trial volunteers play in advancing science.

“In my career as a public servant, I have seen time and time again that service to others is the most rewarding thing in life,” Willhite said. “Joining an Alzheimer’s clinical trial is like buying a lottery ticket, but instead of hoping only you win, you hope that your contribution also will help your children, your grandchildren and everyone that comes after you.”

The National Citizen Scientist Collaborator Award, for which GAP recognized Willhite, honors a study partner who consistently supports a clinical trial participant and who promotes Alzheimer’s clinical research involvement in the community. The National Citizen Scientist Awards are supported by the Vradenburg Foundation. To learn more, visit www.globalalzplatform.org/awards.

Originally posted by The Town Crier on November 5, 2020.