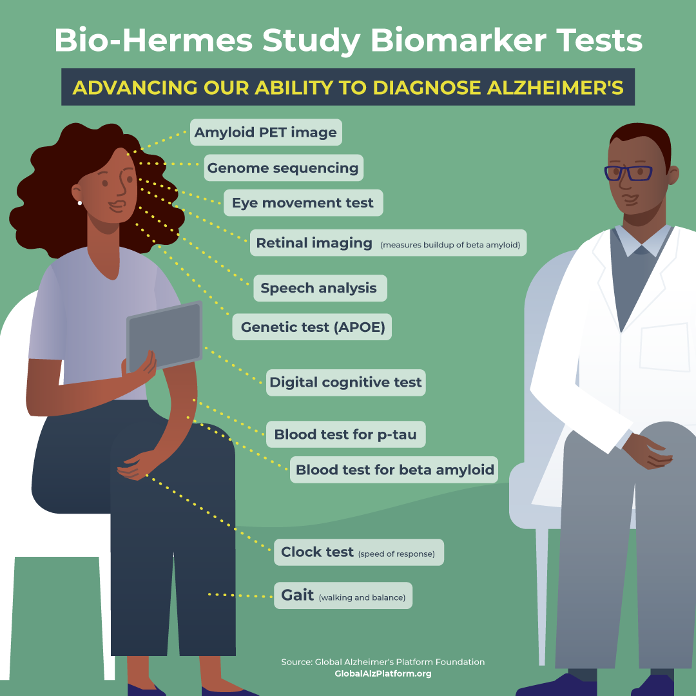 GAP President John Dwyer was on RochesterFirst.com to talk about the ground breaking Bio-Hermes study and what it means for the future of Alzheimer’s detection.

In the next few years – we could expect Alzheimer’s detection to be as easy and accessible as ordering up a blood test, that’s according to John Dwyer, CEO of the Global Alzheimer’s Platform Foundation.

In order to reach this goal, the foundation launched a study working with several businesses nonprofit partners, whose contributions will help determine what’s successful and what’s not in early detection. It’s called the Bio-Hermes study.

He says current tests are too long and expensive.

“They have to put you into a big PET machine, think of those big iron white machines, it’s a non-invasive process but its very expensive,” he said.

Cognivue – neuroscience company in Victor – is one of eleven partners involved in the study.

Their role is to provide cognitive tests that will be compared to nine other forms of testing in the study, including blood and digital biomarker tests, PET scans, and traditional cognitive assessments.

The study aims to determine which test, or combination of tests, is most effective at helping to detect Alzheimer’s.

Tom O’Neill is the CEO of Cognivue, and says earlier intervention is a big part of the research, not just the diagnoses.

For now, participants must be over the age of 60.

The current standard of cognitive testing is paper and pencil, questions and answers which requires a clinician to administer and score the test.  Cognivue’s technology is not a question and answer type of test but rather a series of 10 exercises which are self-administered and self-scored.

Both O’Neill and Dwyer say a diverse group of volunteers is crucial right now – one representing all racial backgrounds.

And for O’Neill and the Town of Victor, this could mean a huge opportunity.

“We will become the new gold standard for earlier testing of cognitive function … the earlier you can test right, that leads to earlier intervention and ultimately better outcomes,” said O’Neill.

The Bio Hermes study will take place in Syracuse, and is asking for 1,000 volunteers. “The more patients we get to volunteer for this study, the better, and we are not going to stop until 20% of these participants are of diverse background, that can include African American, Hispanic…” said O’Neill. Right now, he says existing research isn’t diverse enough.

Originally posted by RochesterFirst.com on April 27, 2021.