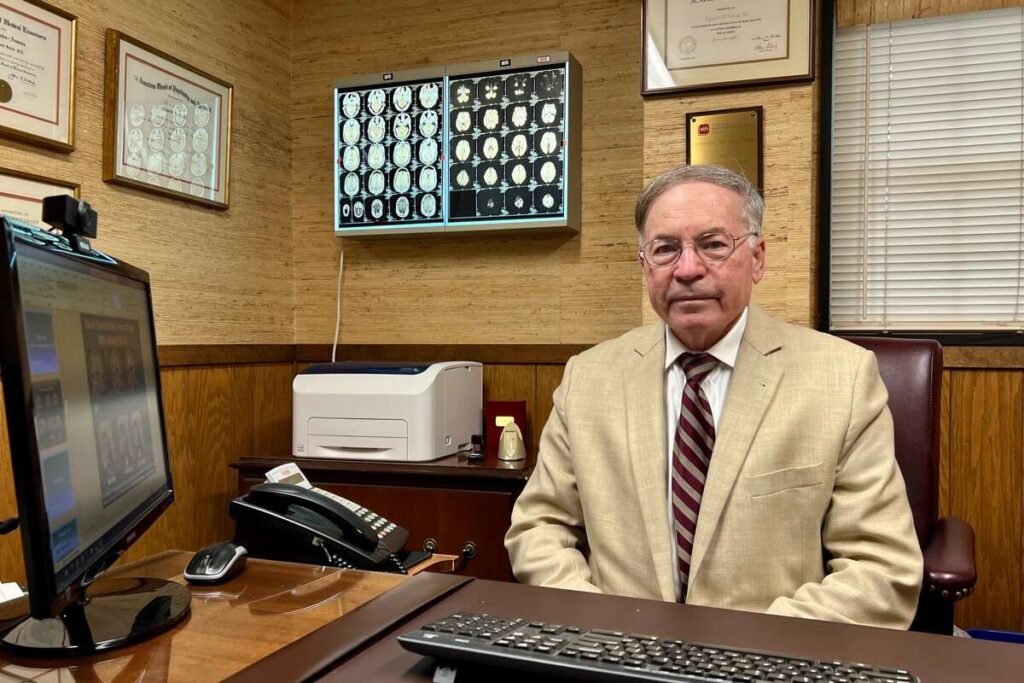 Dr. Richard Holub from GAP-Net site Neurological Associates of Albany talks about his commitment to finding a cure for Alzheimer’s disease and says he won’t be retiring anytime soon.

Dr. Richard Holub has spent the past 40 years dedicated to Alzheimer’s research.

He has treated thousands of Alzheimer’s patients and completed more than 125 clinical trials.

At 74, the president of Neurological Associates of Albany is one of the longest-tenured Alzheimer’s researchers in America.

Think of him as the marathon man of Alzheimer’s research.

Instead of a depressing interview about the heartbreaking and unstoppable scourge of Alzheimer’s that I anticipated, the afternoon I spent with Holub at his office on Madison Avenue near Washington Park left me feeling optimistic.

“A sense that hope is on the horizon is pervasive among Alzheimer’s researchers,” Holub told me. “With all the advances in the last few years, I feel certain that we will see an end to this disease.”

I asked, before he retires?

“I will continue working until this disease is just a bad memory,” said Holub, who employs a staff of 12 with 60 people currently enrolled in 10 clinical trials and dozens of patients in treatment.

Holub will travel to San Diego at the end of July to attend the Alzheimer’s Association International Conference. It draws thousands of researchers from more than 120 countries, who make presentations on emerging research and innovative practice techniques. A key area will be presentations on biomarkers, which is where Holub is focusing his energies.

“It is a very complicated disease. We’re applying the lessons of our research and we’re getting better at targeting the links in how the disease progresses,” Holub said.

He uses highly specialized blood tests and positron emission tomography, or PET, scans with a trace of a radioactive substance in the brain to reveal abnormal deposits of beta-amyloid proteins, known as plaques, as well as abnormal accumulation of the tau protein. Tau forms threads that stick together to create tangles inside neurons. Both proteins block communications between brain synapses as Alzheimer’s disease advances.

“The biomarkers help us detect Alzheimer’s early on in patients before symptoms emerge,” Holub said. “We discovered that we were treating people too late. The key is to diagnose the disease while everything is normal and to begin treatment early to slow or halt the progression.”

Holub was involved in clinical trials for all five drugs that are FDA-approved to treat memory loss caused by Alzheimer’s disease, including the leading drug, Aricept.

Holub scoffs at over-the-counter dietary supplements such as Prevagen and Neuriva that claim to combat memory loss.

“Snake oil,” he said. “There is zero evidence that any of them work.” The same goes for the herbal remedy ginkgo biloba, a passing fad Alzheimer’s treatment in decades past. “It had no effect,” he said.

Holub’s is the only research facility in the region that tests patients for a late-onset Alzheimer’s risk gene called apolipoprotein E, or APOE. He has a National Institutes of Health, or NIH, grant for that study. The clinical trials are funded by pharmaceutical companies, including Eli Lilly, Eisai, Janssen Pharmaceuticals, Cassava Sciences and others.

New studies are also focusing on inflammation in the brain as a potential cause of Alzheimer’s and risk factors associated with diabetes and obesity.

Six of Holub’s 10 clinical trials are still accepting new patients. There is no charge to the patient and no health insurance is required. Patients are screened and must sign consent forms. If an experimental drug is approved, participants in the clinical trials are first in line to receive it.

All Holub’s trials are conducted as double-blind placebo trials, so neither the participants nor the researchers know which treatment or intervention participants are receiving until the clinical trial is completed. Holub’s participants come from throughout upstate New York and parts of Vermont, Massachusetts and Pennsylvania. Clinical trials typically last 18 months and participants visit Holub’s office every two weeks or monthly, depending on the trial. The average age of participants is mid- to late-60s. Most are referred by a primary care physician. Some find Holub’s website (https://www.neurologicalassociatesofalbany.com) or call the office at 518-426-0575.

“They tell us this is a place they can speak freely and share their concerns and fears about Alzheimer’s,” said Mary Ellen Torrisi, senior research coordinator for the past eight years. “The trial participants want to contribute to advancing science and finding new treatments. Our patients really love Dr. Holub.”

Holub is in it for the long haul. He works out of a chalet-style building he purchased in 1979, with the ground floor for seeing patients and the basement level for conducting clinical trials. He is mild-mannered, soft-spoken and methodical. His pace is unhurried.

“This work is not a sprint,” said Holub, who grew up in Amityville on Long Island. He earned his medical degree at Georgetown University School of Medicine and came to Albany Medical Center for a residency in neurology in 1973. He never left.

His first brush with Alzheimer’s came as a youngster when he noticed that his maternal grandfather, William DeMarco, who helped raise him, struggled to find common words and had short-term memory loss. He died in 1960 at 69 after a rapid acceleration of symptoms, with arteriosclerosis listed as the cause of death. This was well before Alzheimer’s was widely recognized and commonly diagnosed in the U.S. beginning in the mid-1970s.

German physician Alois Alzheimer first described “a peculiar disease” in 1906 in a 51-year-old female patient who soon died. During an autopsy, Alzheimer saw abnormal deposits in and around nerve cells. He classified it as “presenile dementia” and considered the woman’s disease exceptionally rare. In 1910, German psychiatrist Emil Kraepelin, an associate of Alzheimer, first coined the term “Alzheimer’s disease” in a medical text.

“And there it pretty much sat as a one-off in a textbook for the next 70 years,” Holub explained.

By 1976, Alzheimer’s was recognized as the most common form of dementia. The Alzheimer’s Association was founded in 1980. Four years later, researchers identified beta-amyloid, a protein that collects between neurons and clumps together to form plaques. These plaques evolve from glue-like to an almost concrete consistency that leads to brain atrophy – the final stage of Alzheimer’s before death.

“I’m not going anywhere until we solve this problem,” Holub said. “That time is coming.”