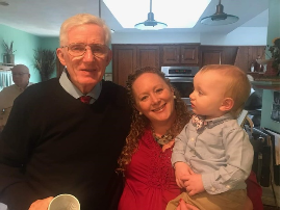 The Gallogly family had a suspicion no family wishes to have: that one of their family members may have Alzheimer’s. After David Gallogly retired from his accounting position at State Street Bank, he continued to work during tax season. “Dad would do taxes every winter, which required him to be recertified every year,” said his daughter Katie. “When he didn’t pass the recertification exam one year, he finally accepted, ‘You guys are right. I can realize this now.’” Katie heard about Dr. Brian Ott at Providence’s Rhode Island Hospital, from one of her coworkers whose mother Dr. Ott had evaluated for Alzheimer’s. Katie and her father made their way to Dr. Ott where David received a comprehensive neurological assessment. It revealed that David had Alzheimer’s and was a prime candidate for the Aware Study clinical trial. “Ever since then, it’s been amazing,” Katie beamed. “My dad’s completely accepted his condition and wants to be of service however he can.”